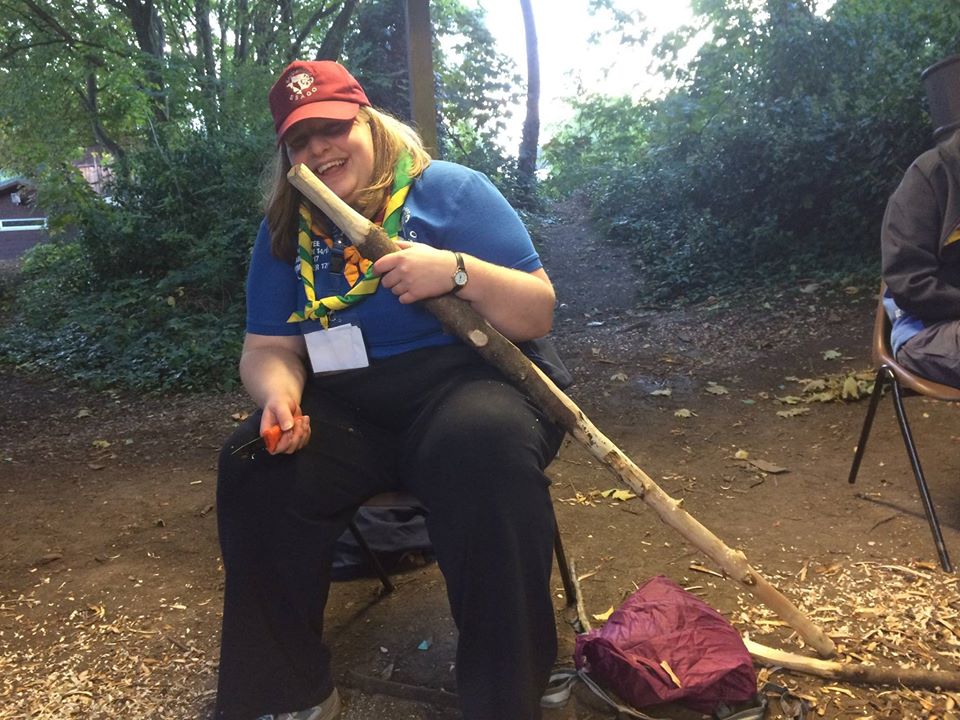 Elizabeth was awarded the 2020 Cutlery Cup for her prolonged and outstanding duty to Southampton SSAGO and Guiding as well as her involvement in many National Events.

Introduction
Elizabeth joined the University of Southampton, and then Southampton SSAGO in the academic year of 2011-2012. She has stayed a member throughout her Undergraduate and Masters degrees, and is currently in the very last stages of her PhD! This means as of the end of this academic year, she has been part of SSAGO in one way or another for 9 years! While this alone would be impressive, but not that unusual, it is the dedication she has shown throughout these years that is truly remarkable.

Rallies
Within her 9 years, Elizabeth has been to a fair number of Rallies, but with Build-A-Rally approaching, will have seen Southampton host 3 different Rallies! Starting with Magic Rally in Spring 2012, Elizabeth was a fresher, but in true SSAGO fashion was recruited into helping run the event nonetheless. Four years later in 2016, Southampton ran Dino Summer Rally and again Elizabeth was involved in the running of this event, but this time as the Chair of Southampton SSAGO. This year she has completed the set, and is now Secretary on the Build-A-Rally Committee, one that she’s doing a great job at, despite the current situation, and also living between three houses!

Club Chair
As previously mentioned, Elizabeth was Southampton SSAGO’s Chair between February 2016 and February 2017. During this time she managed the committee through all the normal trials and tribulations, but also had to support the Dino Rally working group, and later the beginnings of the Southampton International Trip 2017 working group, both requiring additional meetings and time. Where other members may have delegated this responsibility, Elizabeth made sure to help both working groups as much as was needed, giving up her own time to attend meetings and support both sub committees, making sure everything was successfully underway. Whilst Chair Elizabeth also had to source minibuses to get the (particularly large at this point!) club to Rallies, which was made particularly difficult due to both a lack of qualified drivers, and a lack of minibuses. However, despite these difficulties and very much down to Elizabeth’s persistence and persuasion, Southampton managed to attend all three rallies that year, often with more than a full minibus! As a thank you from the rest of the committee, Elizabeth was given a toy minibus to show all of the hard work she put in to ensuring Southampton were able to attend these events.

Guide Liaison
Elizabeth has held the Guide Liaison position twice while in Southampton SSAGO. It was her first role on the committee (in 2014-2015), and also her most recent (2018-2019). Through both of these stints she kept SSAGO on good terms with the Southampton North District, often helping to place students in local units - some who then went on to take the lead in their sections! She has also led several activities while Guide Liaison, most notably a treasure hunt for local scouts and guides in conjunction with the Scout Liaison at the time. This was well attended, and a thoroughly enjoyable day out for the young people involved! Her time and dedication to this role has helped to ensure not only that numerous SSAGO members can get the most out of their time at university, but also that Guiding in the local community gets as much support as SSAGO can offer, several times saving units from being shut.

Quartermaster
Just to finish things off, Elizabeth also held the position of Quartermaster (jointly with myself), using her accumulated knowledge of the club’s kit over time to make informed decisions to clear and tidy the kit store. She also introduced Southampton SSAGO to the concept of a ‘Health’ box, which while was received with skepticism, actually turned out to be a great system for storing all those bits that don’t quite fit in the other boxes!

Other SSAGO-y bits and bobs

Southampton SSAGO International Trip 2017 to Kandersteg
After helping the International Trip committee through their initial stages as Chair, she also went out of her way to help by taking responsibility for the catering during the trip. While normally this is a fairly large responsibility, it was compounded by the very tight budget and the fact we were visiting Switzerland (which is not known for being cheap…). Despite these challenges, and a couple of extra awkward people to feed, Elizabeth put together a great menu, somehow finding enough to feed 24 hungry SSAGOers even after activity filled days!

Elizabeth, like the average SSAGO member, is also a big fan of badges and other SSAGO merch! Through her time as Quartermaster, she revolutionised Southampton’s merch, adding the personalisation we all know and love! She was also one of the first people to suggest that SSAGO have a 50th Anniversary badge. Recently Southampton has had our 20th Anniversary, but as the committee were not going to provide a badge, Elizabeth made sure we wouldn’t go without one, putting lots of time into designing, and ordering badges, which as some of you may have seen, are going down a storm both within Soton SSAGO and more widely! She also had a say in the 15th anniversary, Phil and Phillipa badges, which are still being sold to freshers even this year!

Another thing that shows Elizabeth’s tendency to go out of her way to help and support SSAGO is the now annual trip to the Pantomime that she organises and books! It’s always a great time, we even met an Australian Scouter there once! The panto trip is just one example of many different bits and bobs Elizabeth has organised for SSAGO.

The final highlight that I’d like to tell you about is the fabled Onion Custard. During a long summer camp of catering in 2016, Elizabeth at some point decided that a billy was probably clean enough to make custard in. It was not. Onion Custard occurred. It still gets mentioned to this day.

Queen’s Guide Award
While in Southampton SSAGO, Elizabeth also completed her Queen’s Guide Award (which for the Scouts among you seems to be a lot harder than the Queen’s Scout Award from what I can gather from Elizabeth’s explanation of the requirements!). She also accomplished this while in the throes of completing her PhD, no mean feat itself!
One of the more notable things that Elizabeth undertook for the QGA was an exploration of York, organised for the Southampton Senior Section, which included learning about the history of the local area through visiting several museums, as well as exploratory hikes and themed evening activities. Another large part of this award was her work learning and educating others about invasive species in the UK. As part of this, Elizabeth joined a work party on Brownsea island for a weekend, working to pull out rhododendron. She also visited several different Scout groups to run activities with varying sections about the impact of invasive species in the UK, and what we can do to help native species.

Going Away Licence
Despite being busy with everything else, Elizabeth also managed to make time to achieve her Guiding Going Away Licence, something to provide an even better programme for her guides!

Volunteering at Guiding Events
Elizabeth will always be one of the first people to volunteer at Guiding events. She has taken her Guides to Wellies and Wristbands at Foxlease for numerous years now, and also volunteered at the event one year as part of her Queen’s Guide. She has also attended other camps within the UK in order to volunteer, for example NorJam in 2018. When other groups in Southampton need additional leaders for their camps, Elizabeth will often volunteer, even when it does involve taking 5 year old Rainbow’s on a sleepover (she got very little sleep on this camp!)

As previously mentioned, Elizabeth LOVES badges! The only section she does not have a badge tab for is Brownies, and all of her other badge tabs are completely full. Elizabeth has so many camp blankets that I can’t remember the exact number, but I do know she has her original Guide blanket which is now full, a Rainbow blanket, Brownie blanket, Senior Section blanket, a Scout blanket, and a SSAGO blanket for herself, and a blanket poncho for Southampton SSAGO’s mascot, Phillipa. She is so obsessed with badges that she has even moved onto making badge cushions!

Leader
While in Southampton, Elizabeth has been a Guide leader for several different units, from Rainbows to Senior Section. Her first section was Rainbows, where she helped out from 2012 to 2015, before also joining a Guiding unit in 2015 after finding out that they desperately needed a leader through her Guide Liaison position. After helping with both sections for a time, Elizabeth then took on more responsibility at the Guide unit, and was the main leader all the way up until a couple of months ago! Throughout this time, she made sure that the girls in her unit got the best experience Guiding could give them, often taking them away camping, and doing all sorts of fun activities, both new and more traditional! Since moving to Reading in June, she has now found a new Guiding unit to help out with, and is looking forward to taking the girls on more fun adventures soon!

Elizabeth also dedicated her Sunday evenings to getting together with fellow Guides both in and out of SSAGO at 1st Southampton North Senior Section. She initially started occasionally helping run the unit before to taking on a greater role, sharing the responsibility jointly with another member. She even designed the lovely purple and turquoise neckers that we had! These Senior Section meetings were well enjoyed by everyone, with candle making, a trip to Portchester Castle, and taking the group to see the pantomime at the Mayflower Theatre standing out as some of the more memorable meetings. The Senior Section had a mascot, Carlos, who was a sock Olaf gone wrong, and he even lived in the living room of Elizabeth’s house, and she made sure he attended every meeting.

Scouting
While Elizabeth has only been involved in Scouting for a relatively short amount of time, she is always willing to help out when fellow members of SSAGO need help at their troops, even at short notice. She has always been happy to help, even if she didn’t have much time to spare herself.

In conclusion, Elizabeth shows all of the qualities you would hope for in a member of SSAGO, Guides and Scouts. She is determined, kind, helpful, selfless, friendly, welcoming, encouraging, and a true epitome of the Guiding spirit, and these are just some of the words you could use to describe her. Prior to Witan 2016 Elizabeth had not travelled on a plane before, but was so eager to attend the trip that she took her first flight specially for SSAGO. Not only has Elizabeth been an active member of Southampton SSAGO, as part of her PHD she spent a semester in Bangor where she joined their SSAGO too. Elizabeth has seen a whole SSAGO generation join and leave, all whilst staying herself, and it is very hard to imagine SSAGO without her. There have been many changes within SSAGO over the past 9 years, but Elizabeth has stuck with it throughout, and truly is an asset to SSAGO. Finally, not only is Elizabeth a wonderful SSAGO member, but she is also a fantastic friend, being kind to everyone that she meets.