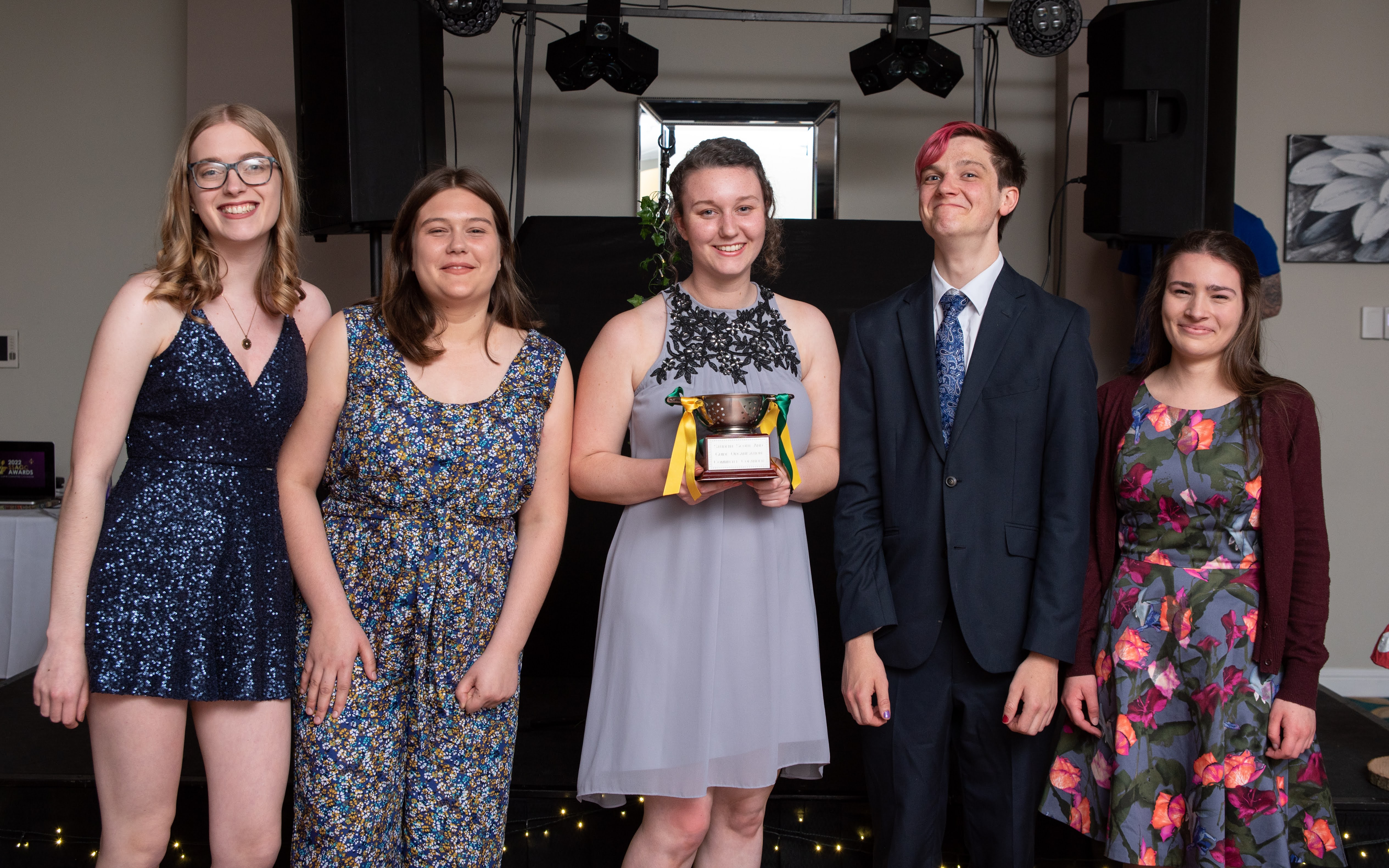 The 19/20 Birmingham University Scouts and Guides Committee were awarded the inaugural Committee Colander for their outstanding year jammed packed with big events such as their 90th Anniversary Camp and Chocolate Rally, as well as excellent recruitment and their focus on health and well being prior to, and during, Lockdown.

The BUSAG 2019/20 committee have had a really great year. We started off by getting stuck in at the deep end, assisting the previous committee with running our trip to Scotland, which 17 members attended. We also pushed attendance at SSAGO Supports Wellies and Wristbands, where we were the club with by far the most attendees: 5 volunteered with Reuben and Sarah on backwoods cooking and another volunteered with the security team, promoting SSAGO to Guides, Rangers and Leaders. The week after this we then hosted our 90th anniversary camp, with past and present members of BUSAG and BUSAG Past Members Association in attendance. Despite having issues with our Guild of Students telling us to invoice Morrisons for the food order(?!) approximately 40 BUSAGers arrived for a weekend of activities and memory sharing and we all had a fantastic time, with great feedback e.g. “Bring on the 91st”.

We recruited seven new members this year – the most BUSAG have had for a few years now. This was such a relief as almost half of our members graduated in 2019! The committee ran a fantastic programme of activities and social events, with a Wednesday afternoon meeting and a social (at varying times to prevent constant clashes) for our members each week. Meetings included monopoly runs to introduce Freshers’ to campus; visits to the botanical gardens; Trangia cooking; hikes; fun with cardboard boxes and a Christmas spectacular which incorporated activities from Christmas eve, Christmas day and boxing day into one meeting – and that was just the first semester! Socials in the first semester involved quite a lot of food: curry night, progressive meal, pub quizzes, fireworks, baking, visiting the German Christmas Markets and also a Christmas film sleepover at a local scout hut. This level of commitment also continued into the second semester and we don’t think that there is a single meal of the day that we haven’t enjoyed together since September! It wouldn’t surprise me if the BUSAG committee put on the most varied and fun programme in the whole of SSAGO, with at least two events each week, their efforts have been truly commendable!

Of course, BUSAG also provided the committee of Birmingham Chocolate Rally, and whilst this was different to the BUSAG 2019/20 committee every member played a part in making the rally the huge success it was: from Nathan and myself being on the rally committee; Rosie and Lucy volunteering to organise the morning activities; Matt and Becky running afternoon activities to Jude just being super enthusiastic and encouraging all her BUSAG Fresher friends to come along after being on committee for less than one month! The BUSAG committee really pulled together to ensure that BUSAG remained as strong as ever and not once did the fact we were running a rally affect the quality of the BUSAG programme – everybody looked out for each other and lent a hand wherever it was needed. It made the whole experience of chairing both a rally and a society committee so much easier for me knowing that both committees had my back, but I do think that the strength and teamwork of the BUSAG committee made this possible and ensured BUSAG was always on top form. Clearly running a rally wasn’t enough for BUSAG so we also ran our own club nights away during term time including the Christmas sleepover mentioned earlier and our Big BUSAG Breakfast! From the start of the University year to everyone heading home due to Covid-19 we offered 8 nights away for our members, which is quite an achievement! (This doesn’t include our summer trip to Edinburgh or our 90th anniversary camp.)

This year we also held a ‘find a unit’ evening to allow local scout and guide leaders to be paired up with willing volunteers. 10 of our members (that we are aware of) volunteered with units whilst at Birmingham, and many more volunteered at home. Our relationship with the local commissioners has become much stronger this year (we know who they are now!) and it has been great to strengthen our connection which should mean that it is easier for BUSAG to collaborate with local Guiding/Scouting in the future.

Something else that the 2019/20 committee introduced was the weekly BUSAG run. This was a casual friendly run after our weekly meetings to encourage our members to get active and to also help with our mental health after a few members had raised concerns confidentially. The run was well received and attended by quite a few members who thoroughly enjoyed it – yes, running, I know! In fact, we enjoyed it so much that the week before lockdown five of our members got up early to catch the bus to the nearby parkrun to represent Girlguiding. Once the dreaded lockdown had set in however, we didn’t let it stop us! Each week we would start a call for everyone to join for a quick chat before heading out by ourselves for a run. The fact that we carried on and the runs were well attended even virtually shows how much of a difference they made to BUSAGs wellbeing.

Once it was established that this virus was here to stay, the Guild of Students announced that no face to face meetings were to continue. Instead of cancelling our planned game of rounders the following day the committee quickly agreed that we would immediately switch to online meetings and virtual rounders was born! The speed that the committee were able to transform our meetings to virtual meetings really shows just how resilient we have been over the last year. Not only did we move our meeting online, we moved our social online! It just so happened that our social for that week, PUBlicity night, was also on Wednesday evening and so as the world was falling apart BUSAG rose to the occasion and opened up our social for the whole of SSAGO. Jude hosted a fantastic Kahoot quiz, with the help of Oli’s technical assistance, and it was great that BUSAG could welcome even more people to our social.

After this huge success the BUSAG 2019/20 committee continued to be active in the SSAGO discord and set up the Get Active channel as a way of welcoming more people on our run; put together the first of the SSAGO badges (SSAGO Isolation); hosted BUSAG’s virtual rounders for everyone in SSAGO (which was apparently somebody’s favourite lockdown activity!) and we also inspired the SSAGO Easter Egg Hunt, after sharing details of our very own which was a few weeks premature since we stuck to our original programme of events but transformed everything into a virtual event!

In addition to all of this, we also increased BUSAG’s activities during lockdown to help support our members. On Monday nights the committee hosted BUSAG chats for a nice relaxed evening to complement our Wednesday meeting and at this point Friday socials (since nobody had commitments anymore). Given there was now little distinction between term-time and holiday time we then worked with the 20/21 committee to create an Easter holiday programme for BUSAG and to also help the new committee get into the swing of things.

We also upgraded the committee handover process. Each 2019/20 committee member created a document to outline their role and explain what the role involves over the academic year so that new committee members can use this as a reference guide as and when needed. In addition, we also hosted a generic committee handover training to ensure that all the general things got passed down, like the forms that needed to be completed and how to book rooms. This meant that the new committee were efficiently set up and ready to go five months before the ‘official’ committee training was distributed by the guild.

So all in all, I think the BUSAG 2019/20 committee have delivered an amazing year for BUSAG and have also contributed to wider SSAGO at support events, rally and getting involved in the virtual SSAGO events too, and all with a smile on our faces. The fact that it has been quite easy to write over 1000 words about our achievements shows the level of dedication, resilience, and friendship of the BUSAG 2019/20 committee and I unreservedly propose them for recognition through the Committee Colander.